The Jaguar F-Type is a two-door, two-seater sports car, based on a shortened platform of the XK convertible, manufactured by British car manufacturer Jaguar Land Rover under their Jaguar marque from 2013. It is the spiritual successor to the famous E-Type. It is also the replacement for the Jaguar XK.

The car was launched initially as a 2-door soft-top convertible, later with a 2-door fastback coupé version launched in 2013.

The F-Type name was first used on a pair of completely unrelated concepts as far back as 1982, when Jaguar realised that the XJ-S had grown too large in size and weight to be classed as a proper successor to the E-Type. The XJ41 (Coupe) and XJ42 (Drophead) concepts got to an advanced state of development by 1988, however the project was cancelled when Ford took over Jaguar in 1989, and the newly installed management determined that upgrading the company’s dated production facilities was a higher priority. The XJ-S was given a major facelift (being renamed the XJS) instead as a stop gap solution. The XJ41/XJ42 studies ultimately evolved into the Aston Martin DB7 and the Jaguar XK8 which were launched in 1994 and 1996, respectively – the latter being more of a direct replacement for the XJS than a true E-Type successor.

A second F-Type concept was unveiled at the Detroit Motor Show in January 2000. It was a two-seater roadster with a 3.0 V6 engine from the S-Type saloon. Geoff Lawson, Jaguar’s Head of Styling, had been working on the development of the car, but died suddenly in 1999, and the project was continued by Ian Callum. This project was soon cancelled, but later revived, with Callum once again being assigned to work on the development of a new Jaguar sports car.[10]

The C-X16 form takes cues from Jaguar’s 2010 C-X75 plug-in hybridconcept supercar, including the shape of the front grille and the wrap-around rear lights, and also has a side-hinged opening rear window reminiscent of the 1961 E-Type fastback coupé.

The convertible version of F-Type was first revealed in Sundance, London which was followed by a presentation at the 2012 Paris Motor Show, 2013 Goodwood Festival of Speed (with an F-Type chassis). 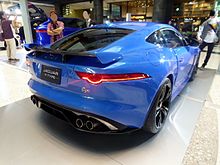 The F-Type has double-wishbone front and rear suspension with adaptive dampers and adjustable suspension settings to allow the driver to adjust ride and handling. The F-TYPE has a total of 25 different driving modes programmed to suit different road conditions and driving styles.

The F-Type interior has a two-seater setup with the leather interior and control buttons finished in aluminium. There is a touchscreen display in the centre console and another TFT display between the dials in the instrument panel. There is also a choice of flat-bottom or alcantara finish for the three-spoke steering wheel and buttons finished in soft-feel matt black.

The F-Type has bi-xenon headlights with integrated LED daytime running lights, along with full LED lighting at the rear. The S and V8 S versions get an “active exhaust system” which opens special valves over 3,000 rpm to intensify the sound profile.

There is a retractable rear wing spoiler and door handles that are left hidden with the bodywork until needed. The fabric hood raises or lowers in 12 seconds, and can be used when the car is moving at up to 48 km/h (30 mph).

The audio systems offered, use Meridian technology with either 380 W spread across ten speakers or 770 W across twelve speakers.

The Jaguar F-Type 400 Sport, a special-edition model that will remain on sale for just one year, was launched as part of a raft of revisions to the British sports car. The F-Type 400 Sport launch edition is powered by a 395 bhp version of the 3.0-litre supercharged V6 engine and a chassis that’s been uprated by the addition of the Super Performance braking system (which features 380mm front and 376mm rear discs and black calipers with 400 Sport logo) and a Configurable Dynamics system which allows drivers to select individual settings for the throttle, transmission, steering and dampers. The F-Type 400 Sport rides on 20in alloys.

It features ‘400 Sport’ badges on the front splitter and rear of the car, as well as the centre console, steering wheel, tread plates and embroidered headrests. The F-Type 400 Sport will remain on sale worldwide for one model year only and is available as either a coupé or convertible and in either rear or all-wheel drive.

The Project 7 is based on the F-Type Convertible, powered by a 5.0 V8 Supercharged engine, developing 575 PS (423 kW). This engine was also used on the F-Type SVR. Only up to 250 will be made and is Jaguar’s most powerful production car ever, alongside with the SVR version. The body is 100% aluminium, reminiscing historical D-Type LeMans winner. Visually, it sports an ‘Aero Haunch’ behind the driver, similar to 1950s D-Type, a quad exhaust and additional rear spoiler. It has a claimed acceleration of 0–60 mph in 3.8 seconds and a top speed of 186 miles per hour (299 km/h). Singer and car enthusiast Brian Johnson drove the prototype car on the first programme of the second series of Cars That Rock, and announced at the end of the programme that he had bought one of the 250 production cars.

The Project 7 is a skunkworks design made by Italian-Brazilian designer César Pieri. It was discovered by chance when Pieri accidentally showed it to Jaguar chief-designer Ian Callum. The concept then became a functional prototype and eventually reached production.